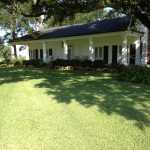 The house was built in the 1940’s by a tobacco farmer named Christophe Roussel in the fine plantation style. You will notice the wide veranda, finely proportioned columns, and glass around and above the front door. The French doors are built in the old style with the door knobs much lower than the doors we build today. Christophe grew perique tobacco, which is only grown in St. James Parish, Louisiana.  Chistophe’s son, Ferrell, lived in the house after him.  Ferrell sold the home to his cousin, “Ruby” Roussel Kliebert and her husband, Tom, in 1972.  We bought the house in 2010 and opened the home as a bed and breakfast in 2011.